NHS watchdog must improve how it prevents cover-ups 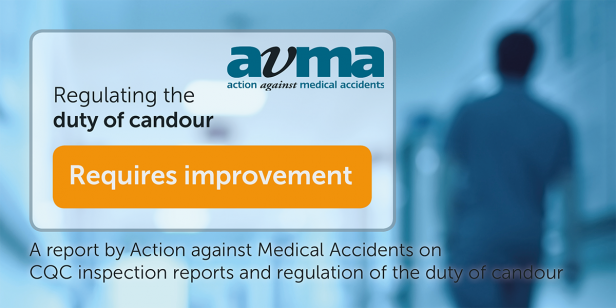 Independent research carried out by AvMA shows that the Care Quality Commission (CQC) “requires improvement” in how it regulates the statutory duty of candour. This is despite significant improvements since AvMA’s previous report in 2016.

The more positive findings include:

However, the research also shows:

“This research shows that the CQC is taking the duty of candour more seriously since our last report and regulatory action has resulted in 108 cases. However, there remain serious weaknesses in its approach.

“How can any inspection of an NHS trust ever fail to look at duty of candour (a ‘fundamental standard’) at all? How can identified failures to comply fully not result in a recommendation, let alone regulatory action? How can the regulator still have no system in place to assess allegations of breaches of the duty or even record the number of them?

“In the CQC’s own terminology, it still “Requires Improvement” itself when it comes to the duty of candour. Our recommendations, if followed, will deliver that.”

AvMA makes a series of recommendations to the CQC to improve its regulation of the duty of candour, including:

The report is based on an assessment of CQC inspections of NHS trusts carried out in 2017 and information acquired by virtue of a Freedom of Information request and further enquiries with CQC staff. AvMA would like to thank staff at the CQC for their help and co-operation, and Daniella Negri who has produced this report on a voluntary basis.