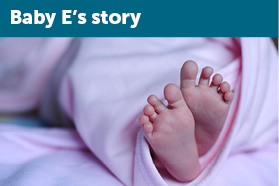 Baby E’s parents were delighted to hear they were having the little girl they had always wanted. “We were so excited when we found out we were having a baby girl and words cannot describe how amazing it felt”, they said. “Having a child and our own little family would have made our lives complete.”

The pregnancy proceeded normally until shortly before the due date, when her mother realised that she could feel less movement from the baby than before. She was also leaking clear fluid and experienced pains she thought may be contractions. At her antenatal appointment, however, she was assured that everything was fine.

When she failed to go into normal labour an induction was scheduled nearly two weeks after her due date. But the labour did not go well: the baby’s heart rate fell and her contractions were weak. She was given medication to increase the contractions, but this led to them happening too quickly. Despite this, she continued to receive the medication.

By 8.30pm, a midwife raised concerns about something she had seen on the monitor, but no doctors were available to come and see. The consultant now asked for the contraction medication to be stopped.

At 9.20pm it was decided that she needed an emergency caesarean. This should be carried out within 75 minutes but did not actually start until 10.43pm – 83 minutes after the decision. The doctor had not check on her again in that time, so had not seen that the baby’s heart rate was dangerously low from 10.31pm.

Despite the emergency caesarean, the delivery was difficult and Baby E was finally born at 10.52pm, in poor condition and in need of resuscitation. She was taken to the neonatal intensive care unit but her condition worsened and she died less than two hours later.

A post mortem had found that the placenta had been small and unable to fully sustain the baby, and she had died because her blood had become too acid due to lack of oxygen. AvMA arranged for a barrister to represent Baby E’s family at the inquest and the Coroner instructed an expert obstetrician to give his opinion on the pregnancy and labour.

The hospital kept the family in the dark until the day before the inquest, when they finally disclosed a number of documents, including ones relating to meetings discussing the circumstances of the death. Investigations by the hospital had identified a number of issues, but Baby E’s parents had not even known that the investigations had taken place.

It was revealed that the department had been short-staffed on that day and that it had not been possible for each patient to be attended by a midwife at all times, as recommended by guidance. There was also only one registrar covering the whole department, including the gynaecology wards and the delivery suite.

The hospital’s director of midwifery told the inquest that changes had been made since Baby E’s death to improve staffing arrangements.

The Coroner’s expert gave evidence that, although he felt that there was a reasonable explanation for not delivering the baby within 75 minutes of the decision, he was critical that her mother was not given clear advice that she was going to have a caesarean and that the registrar did not realise that the baby’s heart rate was low. He commented that there is no point in monitoring the heart rate unless attention is paid to it.

The pathologist who had done the post mortem examination advised that Baby E would have been more vulnerable to injury because of the small placenta, as she would not have had the reserves of a healthy baby. However, the expert’s opinion was that a marginal delay of 15 minutes or even less would have made a difference.

The coroner gave a narrative conclusion, in which she recognised that the low heart rate had been missed and criticised the decision-making process but concluded that she was unable to say whether this had made a difference to the outcome.

Baby E’s parents said: “We have waited two and a half years to find out how our baby girl died. We put all our trust in [the hospital] staff. We feel let down by the hospital and disappointed. Our lives have been devastated by our baby’s death and we have not been able to put her to rest throughout this long and daunting inquest process.

“Action against Medical Accidents has been a rock to us and supported us through the inquest proceedings.”