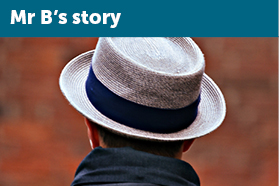 Mr B was an otherwise fit and strong 71 year old when he underwent surgery for cancer of the oesophagus. The procedure involved the use of a nasogastric tube. During the surgery the tube became dislodged and was put back into place by medical staff, despite guidelines against this practice.

It was apparent to the family after the operation that something had gone very wrong. Mr B became very seriously ill and, after suffering terribly, died five months later.

The family asked the hospital for an investigation. Only now did the hospital reveal that a hole had been made in Mr B’s stomach when the nasogastric tube was replaced. Although the Chief Executive expressed his and the staff’s sincere condolences, there was no apology for the error itself which had brought about Mr B’s death.

There was no assurance given that steps would be taken to prevent similar errors in the future. And there was no suggestion that Mr B’s family should be entitled to compensation or should seek independent legal advice.

Mr B’s family asked AvMA for support and advice. After reviewing the facts, we referred them to a specialist solicitor on our clinical negligence panel who lodged a claim on the family’s behalf.

The NHS Litigation Authority, acting on behalf of the hospital, offered to settle the claim for £15,000. On their solicitor’s advice, the family rejected this offer and obtained independent medical reports. With this additional evidence, the claim was eventually settled for £129,000, more than eight times the original offer.

Thanks to the expert support and advice offered by AvMA and the expert, AvMA-accredited solicitor, Mr B’s family received the compensation to which they were entitled. Whilst in no way making up for his completely avoidable death, it gave them comfort to know that the hospital had been forced to admit its failings.