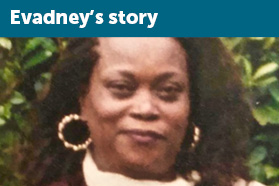 The inquest touching on the death of Mrs Evadney Dawkins was heard by Graeme Irvine, Area Coroner of the Eastern District of London, over two days on 17th & 18th December 2020.

Evadney was clearly very well loved by her family and belonged to the ‘Windrush’ generation. She symbolised the absolute very best of that generation. Post war labour shortages meant there were insufficient skilled workers in Great Britain, so requests were made to the commonwealth countries of the West Indies. Evadney was one of those people who heard that call and answered it. Soon after she settled in Leeds and worked in the NHS employed as an auxiliary nurse. She later returned to the Caribbean for a short time before putting down roots in London, where she worked as a seamstress and proud homemaker. Hearty and strong willed, Evadney was a woman who helped others in their time of need.

Evadney was aged 77 when she experienced a fall at home and was taken to Newham University Hospital on 22nd July 2018, where she was initially treated for a chest infection and fast AF (an irregular and abnormally fast heart rate). She was known to have other co-morbidities that included chronic renal failure and after an assessment, a treatment plan including renal monitoring was agreed. However, her renal function was not monitored for several days until 27th July 2018, when she was found to have sustained a profound acute kidney injury. Following intensive treatment, the acute kidney injury resolved but she sustained a cardiac arrest on 23rd August 2018. She was pronounced deceased that evening.

A hospital post-mortem concluded that Evadney’s death was from multiple organ failure and bronchopneumonia and registered by the hospital as death by natural causes, so an inquest was not opened. Remarkably, the hospital had chosen not to undertake a Serious Incident Investigation into the vast renal deterioration that resulted in a lengthily stay in ICU and it seems regrettable this is not an issue the trust was more transparent about at an earlier stage.

How did AvMA assist the family?

Evadney’s family approached AvMA for assistance, who were able to review the documents at hand and offer submissions that the family could rely on to convince the Coroner to open an inquest.

The Coroner’s investigation confirmed there were ‘gross failures’ in the care provided to Evadney, which led to her renal deterioration whilst an inpatient at Newham University Hospital. Namely, a failure in the frequency of blood tests; a failure in fluid monitoring; and a failure to carry out renal ultrasound. Barts Health NHS Trust apologised to Evadney’s family, after the care provided on Thistle Ward in 2018 at Newham University Hospital was described by the Coroner to be poor, and [Evadney’s] deterioration profound. He also criticised the trust’s systems of governance for not identifying for two years that Evadney’s case was a serious incident which required investigation.

The Coroner issued a Regulation 28 (Preventing Future Deaths) report and expressed concern that many of the recommendations by the trust seemed to be made “late in the day” and that there ”does not seem to be any meaningful empirical evidence of change on the ground other than the anecdotal evidence of [witnesses]”. The Coroner went on to say “I am still very much of the view that this is a case I ought to issue a Regulation 28 report about concerns about factors that led to deterioration of Mrs Dawkins’ health. Specifically, the breakdown in communication during the treatment of Mrs Dawkins that led to nursing and clinical staff not putting in place renal monitoring, despite being instructed to do so. My duty is wider than simply the Bart’s NHS Trust. It may be the report I issue is sent to the Secretary of State for Health & Social Care and may have impact on other trusts other than Bart’s.”

With inferred reference to the Duty of Candour and difficulties experienced in getting to the truth, the family commented that the trust had more than a year to change things so welcomed the Coroner’s decision to issue the report.

Statement of the family

“Our mother Evadney Dawkins died at Newham University Hospital on the 23rd August 2018 from multiple failures in her care. She was not dying at any point, but from all the inappropriate treatments and lack of monitoring throughout her admission, unfortunately led to a fatal outcome.

“She wasn’t without health issues connected to her age as confirmed by the independent medical examiner’s comments in the inquest, stating that she was well managed in the community for many years and was not critical on admission on the 22nd July 2018. He went onto to state that but for their actions her death would have been avoided.

“We know our mother would still be alive today and losing her has had a devastating impact on all of her children. We are continually seeking justice for the loss of our mother, and how she must have suffered from gross failures in care during this time. Until this day this tragic event still plays on all of our minds and we will not rest until justice is served.

“Thanks to the continuous help and support from AvMA, we were able to secure an inquest. Dr Christopher Charlesworth’s input and research proved invaluable in providing the coroner with relevant information on how wrongful treatments led to the cause of multiple organ failure. Without us having an inquest, many more systemic failings would not have been identified. We are truly grateful for all the guidance we received.”