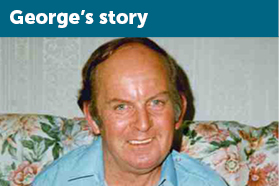 In a tragic twist, George survived brain surgery only to die from a medication error.

George was out enjoying his garden in October 2012 when he slipped and fell, badly hitting his head. He was taken to hospital where he was diagnosed with a subdural haematoma – a serious condition where blood collects between the skull and the surface of the brain.

George was transferred to King’s College Hospital for life saving brain surgery. The operation was a success and George was moved onto a ward to recover.

For some time before this, George had suffered from osteoarthritis and he took the anti-inflammatory medication naproxen to manage this. Naproxen is well known to cause damage to the stomach lining, so it is always taken with food and George also took omeprazole with it, which protects the stomach.

As he recovered in hospital, he was prescribed his normal naproxen, but was not given the omeprazole to go with it. By the time the hospital stopped the medication, approximately one month later, George had developed severe bleeding and ulcers in his stomach.

George’s condition worsened and he died on 4th December 2012.

George’s family approached AvMA for support at the inquest. Our expert advisers were able to offer support and guidance through this difficult time and arranged for an expert clinical negligence barrister to represent the family at the inquest on a pro bono (free) basis.

AvMA and barrister Edward Ramsey were able to show that George would probably not have died if he had been given omeprazole. No routine checks were made on his medication and so he continued to receive naproxen even after exhibiting clear signs of bleeding. The coroner concluded that his treatment amounted to neglect.

George’s wife said “I don’t know what I would have done without AvMA. I was overwhelmed by my grief and daunted by the legal process.

“Finding AvMA completely changed how things progressed and I can reassure myself that I have done all I can to find out what happened to George and trying to instigate change.

“Everyone has been so professional and kind to me.”