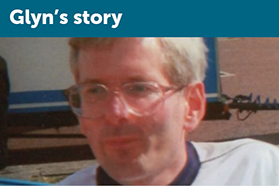 By his sister, Anne

Glyn Davies was disabled and died on 7th October 2016, aged 53, in The Royal Lancaster Infirmary, part of The University Hospitals of Morecambe Bay NHS Foundation Trust. He died from aspiration pneumonia after two weeks in intensive care. He had an obstruction of the small bowel caused by adhesions from previous surgery.

Glyn had a colostomy operation in Lancaster Infirmary. Although it was major surgery, Glyn had a straightforward recovery due to the competence of the nurses and clinicians involved in his care.

Glyn attended A&E due to stomach pain and vomiting brown fluid. He had routine tests and was informed that his chest x-ray was clear, but his abdominal x-ray. showed signs of small bowel obstruction and moderate constipation. It was noted that Glyn was hydrated, in a good nutritional state and other tests taken were within the normal parameters.

A junior doctor arrived to see Glyn and his family and told them that it was very likely to be adhesions/scar tissue causing the problem. He used an analogy of a blocked sink where they didn’t want to put more fluid in him as there was a high chance he would vomit with the risk of aspiration (inhaling the vomit).

The doctor said Glyn was to have a nasogastric tube to keep the fluid levels in his stomach down. He would need further investigations, including a CT scan and possibly surgery after he was allocated to a ward.

At that time there wasn’t the slightest indication he would not leave the hospital alive.

Glyn was on the acute surgical unit for assessment. During visiting I filled in the hospital ‘Forget-me-not Passport’ for when he was not responding to staff. Glyn was disabled with severe kyphoscoliosis (a type of curvature of the spine), he lived at home and was looked after by his dad and older brother. He had full capacity to make his own choices and decisions but was also on the high functioning end of the Autism Spectrum. He didn’t have a learning disability but could be socially unresponsive if he was tired or worrying about something.

Although the correct diagnosis was made on A&E, Glyn’s treatment plan was changed by a senior colorectal consultant during her morning ward round. Having found his abdominal x-ray difficult to interpret she changed his diagnosis from small bowel obstruction to constipation.

Glyn was transferred to another surgical ward. He was taken off nil-by-mouth, the nasogastric tube removed and he was treated with Lactulose and a Phosphate enema through his stoma. He was to have as much fluid as tolerated and all being well go home the next day.

Glyn looked very poorly, his consultant asked for blood tests to be taken but these were forgotten about. During afternoon and evening visiting Glyn wanted to sit up. Raising the back of the bed wasn’t an option as his stomach was bloated and sitting further forward hurt him. He wanted to go home so dad could look after him.

By evening visiting he was in severe pain, worried he might die and was desperate to sit up and take the pressure off his back. The clinical lead nurse said Glyn had been asking this all day, but due to his stature it wasn’t safe for him to be sat on the side of the bed. Nursing records also show he was lying on his back in bed for the majority of the time and every so often he was rolled. His pain scores were recorded as nil which was an absolute farce. I think ward staff who did attend to Glyn were lacking the initiative and training to look after him, although they did raise concerns in the early hours of Friday.

Glyn was gravely ill. The doctor who attended noted he was clammy and put his fast shallow breathing down to anxiety. Three hours later it was panic stations when they realised Glyn was dying. He had small bowel obstruction caused by adhesions from his colostomy operation.

Overnight Glyn’s stomach had filled up with fluid and was grossly enlarged, it took eight to nine attempts to get a nasogastric tube through a nostril and into his stomach to remove the pressure. That was when they realised he was aspirating his stomach contents into his lungs.

Glyn’s body was shutting down. He had gone into Type Two Respiratory Failure and was resuscitated on the ward. He needed a high amount of oxygen to keep him alive and intravenous Tazocin for chest sepsis. Another consultant took over Glyn’s care and arranged for a CT scan then onto the ICU for optimisation.

Glyn needed surgery and was in a medical induced coma. He had a very slim chance of survival but that would have been nil without an operation. The operation was a success and as the days went by Glyn was recovering well from it. The main problem was his badly damaged lungs.

He was intubated on a ventilator. His lungs filled with dark brown fluid and stomach acid that caused swelling and scarring. An anaesthetist advised that should Glyn fail when taken off the ventilator, it would not be in his best interest to put him back on it. Due to his kyphoscoliosis the intubation would be difficult and uncomfortable.

Glyn did fail and they did put him back on it or he would have died. A day later he was taken off the ventilator for the last time. He was given palliative care to keep him as comfortable as possible and died surrounded by his family on the afternoon of Friday 7th October.

Although Glyn was treated well on the ICU, we felt that doctors and nurses had closed ranks on us with regard to what happened on the surgical ward. The Monday after Glyn’s death I contacted the Coroner’s Office concerned that Glyn had died an unnecessary death that would be swept under the carpet. There had been no adequate supervision or monitoring of him and he died of something that should easily have been avoided.

Once the Coroner was involved, the Trust did a Root Cause Analysis into Glyn’s death and appointed a Clinical Specialist with vast experience of mental health issues, learning disabilities and the autism spectrum. The Trust also made available Hospital Passports specifically for children and adults with autism.

A year later, concluding the Inquest into Glyn’s death, the Coroner Mr Richard Taylor gave a Narrative Verdict and put the cause of death as “Aspiration Pneumonia, following a delay in fully diagnosing his condition”.

The Patient Safety Team at Morecambe Bay Hospitals Trust assured us that lessons have been learned and it will make a difference for other disabled people coming into their hospitals. Although they did accept that Glyn’s care could have been better, the Trust stopped short of blaming themselves for his death and were adamant that Glyn would have died anyway.

The file containing Glyn’s medical records from his admission took some ploughing through but was a damning insight as to the mistakes they made and things not divulged to the Coroner. This was compounded by Glyn catching the bacterial infection Stenotrophomonas Maltophilia from either the ventilator or tubes whilst in intensive care. It has a high mortality rate and is difficult to treat. This was not disclosed to the Coroner as a contributing factor to Glyn’s death.

We believe Glyn died a terrible painful unnecessary death due to hospital negligence. The Post Mortem revealed that his lungs were solid and airless.

As a family we did not feel justice had been done so I phoned the AvMA helpline for advice and spoke to Katherine. She was very helpful and explained about the duty of care that the hospital trust should have provided. She explained the funding procedure in medical negligence cases and how to choose a solicitor that specialises in that subject. After speaking to AvMA and reading the patient stories, we felt confident enough to take civil action against Morecambe Bay Hospital Trust.

After searching the help and advice page on AvMA’s website, we approached Forbes Solicitors and spoke to John Bennett. He thought there was a good case to answer and instructed an independent medical expert to review Glyn’s files.

In his unbiased opinion, the medical expert thought Glyn’s treatment fell severely short of the standards to which he would have expected. Having looked at the operative notes, his opinion was that Glyn was always going to require surgery to clear the adhesion obstruction and that couldn’t have been avoided. But with appropriate and timely care Glyn’s death could have been avoided and he would have been back to his pre-operative self in around six weeks.

The University Hospitals of Morecambe Bay NHS Foundation Trust continued to dispute this but they settled out of court by way of a Part 36 offer in March 2020.

We are very grateful for the help we had from AvMA and Forbes Solicitors. It made life easier knowing Forbes had taken on the fight for justice and we could concentrate on looking after dad. Glyn’s death had taken a huge toll on him and he died before the case was settled.