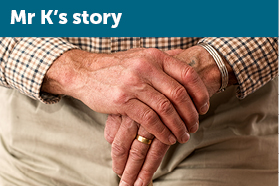 Mr K was admitted to hospital experiencing shortness of breath. At 81 years old, he had a history of lung conditions and suffered from chronic obstructive pulmonary disease (COPD) and bullous emphysema. Three years earlier he had been diagnosed with a large air pocket (or ‘bulla’) in his right lung.

Despite this history, the hospital did not involve their respiratory team in his treatment and his previous chest x-ray was not reviewed. This led to him being misdiagnosed with a tension pneumothorax.

Based on this incorrect diagnosis, he was fitted with an unnecessary chest drain. The drain collapsed the bulla and ruptured the vessel leading to progressive bleeding. It is likely that he could have been saved if the hospital staff had recognised this and given him surgery for the bleed, but this did not happen.

A further chance was missed the next day when he was reviewed by the medical team, who failed to realise their error. Sadly he died two days after the drain was inserted.

A later review of his case showed that he did not have a tension pneumothorax and his breathing problems were caused by the existing, known bulla, but this was not discovered at the time.

At his inquest, the coroner found that the unnecessary chest drain led to his death and there was a missed opportunity to reassess the situation at the review the next day.

The coroner ordered that a prevention of future death report be made as the evidence heard at the inquest revealed a number of matters that gave rise to concern.

AvMA offered support to his family and arranged for them to be represented free of charge at the inquest.