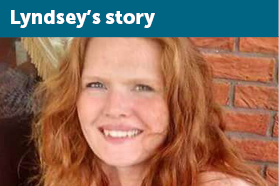 Lyndsey was a proud mother to two girls and was delighted to be expecting her third child at the age of 36.

Unfortunately Lyndsey had been suffering from a codeine dependency to help manage past trauma. She contacted her local GP for help to stop taking the codeine and they prescribed a seven-day course of methadone over the telephone. Lyndsey received no face-to-face consultation to discuss this prescription.

Lyndsey’s pregnancy proceeded normally, although as her third trimester approached she noticed she was getting severe varicose veins. She raised concern about these at both her 25-week and 28-week check-ups, but it was not until her 32-week check-up that they were examined by a consultant, who prescribed an anticoagulant as well as support stockings which were never received.

Shortly before her due date, Lyndsey was visiting a relative when she collapsed suddenly and she went into cardiac arrest. An ambulance was called immediately and she was resuscitated before being taken to hospital some 19 minutes after the ambulance first arrived. The ambulance team radioed their control centre to pre-alert the emergency department, but this was not passed on to the hospital.

On arriving at hospital she was given an emergency caesarean, but sadly the baby showed no signs of life and could not be resuscitated. Lyndsey had suffered a massive haemorrhage, with up to 3 litres of blood found in her abdomen. She was transferred to theatre where surgeons performed an emergency splenectomy, as the bleeding was thought to be coming from the spleen. However, the bleeding did not stop, so the surgeons performed a full hysterectomy. The bleeding was still constant and they suspected she was suffering from disseminated intravascular coagulation, a condition in which blood clots form throughout the small blood vessels which can reduce or block blood flow, damaging the body’s organs.

Lyndsey was transferred to intensive care, but sadly died the following morning. Cause of death was found to be shock and haemorrhage, and a perforated gastric ulcer.

Following her death, Lyndsey’s father contacted AvMA for support and advice. Our specialist inquest team provided information and guidance to assist the family in understanding and navigating the inquest process. We also arranged legal representation by a barrister on a pro bono basis.

She was concerned about the methadone being prescribed with no face-to-face consultation; about a lack of detail about how Lyndsey was taking the drugs; and the decision to provide a methadone-naïve patient with a seven-day supply of the drug with no medical review during the initial phase.

Lyndsey’s family said “When tragedy strikes your family, it is so important to find as many answers as possible. Having to sit through three days at an inquest is extremely stressful and daunting. We would like to say a big thank you to AvMA, to our barrister Mr Andrew Wilson and a special thank you to our AvMA case worker for their professionalism from when we first contacted AvMA to the three-day inquest hearing. We will always be so grateful to AvMA for their help and support”.