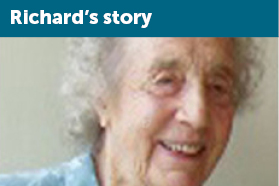 When Richard von Abendorff contacted AvMA about his late mother’s case, he was determined that lessons were learnt. Against all the odds he got a patient safety alert issued on the dangers of the drug Naloxone. However wider concerns about end of life care remain.

“Can patients’ families raising serious safety concerns and providing evidence of services not fit for purpose expect robust action from statutory health bodies? After a near four year journey following my elderly mother’s avoidable, iatrogenic, horrifically painful death in hospital I have to conclude, from my experience, NO.

“The hospital admitted many failings but despite a multitude of processes including complaint, Ombudsman (ongoing), inquest, CQC, Healthwatch, CCG and expert reports, no robust remedy has yet been achieved.  Although I retain some hope that this will eventually occur, with an ongoing PHSO investigation and also recent recommendations that a new investigative approach to health clinical failures to be established.

“I wanted to warn others about the dangers of Naloxone for palliative and cardiac-risk patients so I purchased an independent expert’s report which I circulated widely in the hope of raising awareness. After two years and on the back of this report, NHS England published a patient safety alert. However my mother’s subsequent sub-standard treatment also was a case study of the poor end of life care for some people in acute hospital settings.

“During this process I gathered evidence about the risks and harm this causes patients. I make this evidence available for the first time in the hope that other hospitals may act on it.

“Firstly the coroner’s palliative expert report identified issues contributing to her poor end of life care. Perhaps most damning was that purely advisory palliative services in an acute hospital setting are ‘not fit for purpose’ to meet the needs of more complex dying patients. How many hospitals offer just that?

“Secondly the medico-pharmacological report, which led to the patient safety alert, identified mechanisms by which under-treated severe pain can hasten death through heart related effects. This has serious implications for care settings.

“Six months after first publication of these reports I have been very disappointed to note no  interest expressed on the serious risks and concerns around these two issues, despite a number of reports issued on end of life care in recent months. Although should Baroness Finlay of Llandaff’s Access to Palliative Care Bill be made law and be fully implemented, these concerns should start to be addressed for some patients.

“However, the major and growing funding gap in end of life care, revealed by Channel 5 and ignored by statutory and voluntary sector lobby groups to date, suggests that these serious concerns about services ‘not fit for purpose’ continue despite positive rhetoric and exhortation from many reports by ‘insiders’.

“Perhaps an expert panel review, as in the case of maternity care from the Morecambe Bay tragedy should be convened to push real progress forward before more scandals like that of Charity Bagwell and many others occur. Patient and family representation on the panel as ever will be important as it is still significantly underutilised in, for example, the current  patient safety initiative, the IPSIS expert panel and current NICE consultation on end of life care guidelines.

Updated version of report first circulated by AvMA in January 2015
×