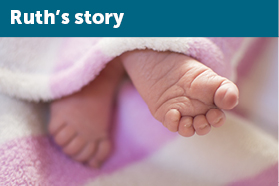 “Our first born was a very reluctant arrival, finally putting in an appearance at 42 weeks following a routine pregnancy. Labour was complicated by shoulder dystocia – a condition whereby the baby’s shoulder becomes stuck behind the mother’s pelvic bone. Correctly managed this can be overcome, however this was not the case for us.

“Following oxygen starvation during his birth my son suffered colossal brain damage – later diagnosed as cerebral palsy, a broken collarbone, punctured lung and Erb’s palsy (paralysis of the arm due to nerve damage) – and was fitting for a number of days after birth.

“Later that day the consultant explained to us there would be a degree of damage and said it was ‘just one of those things’. Yet at the same time, the midwife who managed my delivery was suspended.

“We had no comprehension of what lay ahead. The first few weeks were solely concerned with stabilising our son, getting out of hospital and trying to cope at home. All we wanted at this stage was answers – why? what happened? what would it mean?

“We began to research and discovered quite how badly my labour had been mismanaged. We applied to have copies of the medical records and when they arrived, some were missing, some had been expanded to fill in missing observations during labour and there was no record of the midwife’s disciplinary hearing – apparently nothing had been recorded!

“I met with a representative from the Community Health Council who advised me to speak with the doctors. All along there was a feeling that everyone was holding back, wanting to tell more but unable to. We were at a loss where to turn.

“Somehow I got the number for AvMA and Christine answered. When she said she had heard of the condition of shoulder dystocia, I just cried – after six months, I’d finally found help and someone who understood and was sympathetic to my predicament!

“AvMA was able to provide me with information on my rights and help me decide what to do next. They put us in touch with one of the specialist solicitors who they accredit, Kate Rohde, (now of Kingsley Napley solicitors). Kate is a remarkably compassionate lady who seemed to understand our journey and guided us throughout, picking us a legal team suited to our case – a wonderful group of professionals to whom we are indebted.

“I remain so very glad I kept searching until we found AvMA and Kate – I truly believe the outcome of our case would not have been so successful without expert help.

“Our case lasted ‘til my son was eight and a half. There was a lot of anger by this stage but we recognised that we had to go through the process to get what was needed for our son.

“We were fortunate to get an early admission of causation and therefore several interim payments. This made life so much easier as we were able to buy a bungalow and equip it as needed and to employ a care team. Whilst very necessary and much appreciated, adjusting to carers in one’s home proved difficult and I suffered depression and needed counselling through this period.

“Some people seem to think that receiving compensation in a medico-legal case is all about fantastic holidays in Florida and payback for the hurt that has been done. It is not. No amount of money could heal the harm that has been done.

“Compensation is about being able to buy additional pads because the NHS only allow you 4 per day, it’s about employing night carers so you can sleep, it’s about buying an adapted van so you can go out as a family, and it’s about managing that money really well to make it last because the Chancellor still wants his 40% cut!

“Today, I am as near to accepting and dealing with what life has dealt us as I will ever be. My son is profoundly disabled, he cannot walk, talk or use his hands. He is doubly incontinent, has epilepsy and is registered blind. I can no longer lift him and using hoists and specialised beds, shower chairs and wheelchairs is part of everyday life. Perversely he has normal intelligence which brings its own difficulties.

“Initially the events surrounding my son’s birth destroyed us all, including extended family and friends. It is true to say that time is a great healer and whilst life is different from what we had hoped, it is not all bad. Our son is still alive and happy, we now have two beautiful daughters and we are very fortunate to live in a fully adapted home and employ a superb team of carers.

“I don’t think too far ahead but one thing I do know is that for the foreseeable future my son’s welfare is secure thanks to his compensation, and thanks to people like Kate Rohde and AvMA.”

Some people decry the amount paid out to families with children damaged by negligence during childbirth, but anyone who visited and got to know this family and others like them would soon appreciate that they need and deserve everything that they get. Sadly, due to the current system, many go severely under-compensated or receive nothing at all.

The story is also testimony to the importance of the caring, compassionate response, as well as the technical and legal expertise provided not only by AvMA itself, but the specialist solicitors like Kate Rohde who make it onto AvMA’s specialist panel.