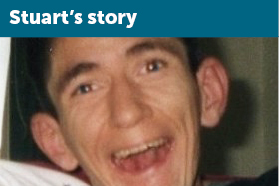 Despite suffering from dystonia – a condition that causes severe muscles spasms and contractions – 39 year old Stuart Hurrell enjoyed life. “His wicked sense of humour and infectious smile brought joy to all those he came across,” his father remembers. “He was gentle, caring and full of consideration for others.”

Dystonia is incurable, but Stuart managed his condition with three medications, carefully balanced to control his spasms without making him too drowsy.

In December 2012, Stuart required surgery to remove his larynx. Following a successful operation, he was transferred to a private neurological centre to recover. One week into his stay, the centre ran out of one of his medications – clonazepam. Yet despite its importance to Stuart, the centre did not replenish the clonazepam and Stuart was deprived of its vital benefits.

By 21 December, Stuart had become very unwell, with a high temperature and pain on urinating. Nursing staff at the centre failed to run tests or seek a doctor’s opinion and instead treated this as a urinary tract infection. Stuart’s condition worsened and on Boxing Day morning he was found unresponsive in bed.

He was rushed into intensive care at Gloucester Royal Infirmary but it was too late. Stuart had suffered severe kidney and muscle damage and, despite a brave fight for several weeks, he died on 20 January 2013.

An inquest into Stuart’s death took place in April 2015 and Stuart’s family turned to AvMA for support.  We provided expert support and advice, and helped his father deal with the huge volume of paperwork that precedes an inquest. We also arranged for an expert clinical negligence barrister to represent the family at the inquest on a pro bono (free) basis.

At the inquest, the coroner found that the lack of clonazepam had caused an increase in Stuart’s muscle spasms, eventually leading to severe muscle and kidney damage. He then developed bronchopneumonia, which was the final factor in his death.

Stuart’s father said: “Having suffered the loss of Stuart in January 2013 we were unsure of what if any support might be available to us to help in getting a clear understanding of the factors that led to Stuart’s death.

“AvMA provided us with support, enabling us to prepare ourselves for the inquest and during the inquest itself. With that support, we feel that the inquest was as thorough as it could be and that the conclusion from the Coroner fairly represents the circumstances that led to Stuart’s death.

“The support and assistance from AvMA and [barrister] Linda Jacobs was invaluable to us in ensuring that the process was fair and covered all relevant aspects relating to Stuart’s death, something that we as a family, despite our best endeavours, could not have managed by ourselves. We are very grateful to AvMA and Linda for their help and support through a difficult process.

“Stuart’s family and friends miss him greatly, but thanks to the help of AvMA we are able to move on knowing that we did all that was possible in this final undertaking on Stuart’s behalf.”