Is the Government trying to bury bad news? 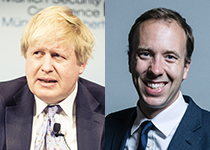 Is the Government oblivious to the avoidable harm caused to non-COVID patients as a result of disruption to health services during the pandemic? Or worse, is it trying to bury bad news?

On 18 June 2020 I, together with other organisations and experts, wrote to the Prime Minister and the First Ministers of the UK nations about avoidable harm being caused to non-COVID patients as a result of prolonged disruption to health services since the start of the COVID-19 pandemic.

At the time of writing this blog, we have still not received a response to that letter from Boris Johnson or Nicola Sturgeon. Neither has there been any public acknowledgement of the scale and seriousness of the problem or empathy shown with families losing loved ones as a result of this, as opposed to those who tragically lose loved one to the virus itself. This, in spite of the fact that it is estimated that as many or even more people could end up dying as a result of the lack of access or delays in obtaining diagnostics and treatment.

In the field of cancer alone it is estimated that there could be as many as 35,000 extra deaths this year as a result. However, many other patients in a wide variety of disciplines could also be affected.

The failure to acknowledge the problem and ensure that it is urgently addressed, or even to show empathy with those affected is at best irresponsible and deeply disrespectful to all those affected or at risk. At worst it could be a conscious decision to bury bad news and avoid responsibility.

Recently, the Guardian covered the story of a petition I had lodged on the UK Parliament petitions site about this issue, which was rejected after being held back for two months ‘for checking’. It was ready to go live on 8 June. After repeated enquiries about the delay, on 6 August I received notification that it had been rejected. The reason given was astonishing – that “the UK Government aren’t responsible for the issue you raise”.

The petition called on Government to “Accelerate the opening of diagnostics and treatment for non-covid patients”. The full text of the rejected petition can be seen here. The notion that Parliament does not consider the Government responsible for the way the NHS handles the response to the pandemic, including the safety of non-COVID patients is very disturbing.

We regularly hear announcements from ministers that seek to take credit for elements of the response – for example accelerating and expanding testing for COVID-19, developing Nightingale hospitals and distributing more PPE for staff in health and social care. NHS bodies are responsible for implementing these initiatives just as they are for delivering health services and re-opening them, but clearly the Government sets priorities and ultimately ministers are responsible for the response.

Also, there are many examples of petitions on the Parliament website that cover issues where the responsibility for implementation clearly lies with NHS bodies or arms length bodies that have been accepted. It would be wrong if this were not the case. Of course you wouldn’t expect petitions which are purely about local or day to day operational issues to feature on the site, but the petition clearly does not meet that description. Added to this, if the petition really did not meet the criteria how could it take so long to recognise this was the case, particularly as the website says that petitions about coronavirus are being given priority?

It is not clear who officials responsible for the petitions website consulted about the petition. It is hard to imagine that no-one at the Department of Health and Social Care was consulted. Even if ministers, their advisers and officials were not involved, the fact that those responsible for the decision consider that issues of this magnitude are not a responsibility of Government and are so ready to suppress a petition about them is very worrying.

How could this issue be handled better?

For a start, the Government should clearly acknowledge the scale and seriousness of the problem and explain what is being done about it. Clearly it is not that the NHS is doing nothing. We are aware of the response from NHS England for example. However, what we haven’t seen is a strategy from Government and its ministers.

There needs to be detail about the priorities that are being set for the NHS and additional funding that will be required if the NHS is to have any chance of catching up and reducing additional avoidable harm and death to non-covid patients. This should include what additional resources are being provided to the other UK countries to whom responsibility for healthcare is devolved.

The Government should also show empathy with non-covid patients who are suffering avoidable harm and their families where they have died in the same as it does those who have lost loved ones to the virus. Every day we see latest figures for COVID-19 deaths and the running total. It would be good to see something similar about those affected by the disruption to health services as a result of the pandemic.