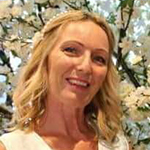 Paula McGowan grew up in Liverpool and is married to Tom McGowan who is a Senior Officer in the Air Force. Paula is an early year’s teacher and specialises in children who have additional needs.

Paula is a Multi Award-winning Activist who has dedicated her life to campaigning for equality of Health and Social Care for Intellectually Disabled and or Autistic people. She is an ambassador for several charities and organisations. In 2018, Paula successfully launched a parliamentary petition asking for doctors and nurses in England to receive mandatory training in Learning disability and Autism awareness. As a direct consequence Government announced that Health and Social Care Staff would receive The Oliver McGowan Mandatory Training in Learning Disability and Autism.

Paula continues to work with Government, Health Education England and Skills for Care in the design and development of Oliver’s training. She speaks at universities, medical schools and hospital trusts across the Globe. Recently Paula spoke for The Australian Royal Commission hearing 6, Psychotropic medication, behaviour support and behaviours of concern.

Paula has co-authored several papers which have been published in the British Medical Journal: